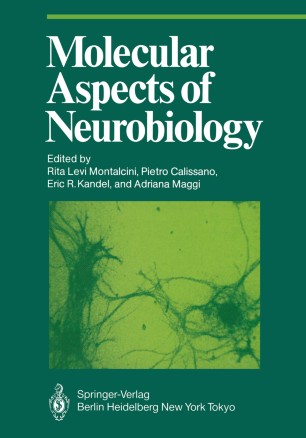 The past two decades may well become known as the golden era of neurobiology. This field, that in the first half of this century seemed far too complex to be investigated with the low resolution techniques available to the investigators, suddenly blossomed in the second half of the century into one of the most promising areas of biology, thanks to discoveries which took place practically simultaneously in most areas of neurobiological research. Here we mention only some of the most important: the discovery of the large number of neurotransmitters from monoamines to peptides, the identification of the mechanism of action of different agents through their binding to specific receptors, the recognition that neuro­ transmitters act most of the time through a second messenger, and the discovery that growth and differentiation of nerve cells depend on activation by the protein molecule; all these were recognized I!S specific growth facts, of which the NGF was both the frrst to be dis­ covered and the object of the most intensive investigation. Recently, the development of highly sophisticated techniques such as recombinant DNA and monoclonal antibodies has been suc­ cessfully applied at the cellular and subeellular level to the study of nerve cells, neuronal cell population, and to the mechanism of their interaction. Studies pursued with the collaboration of different investigators all over the world have opened a new panorama of the tremendous complexity of the CNS, from the neuron to the whole organism.