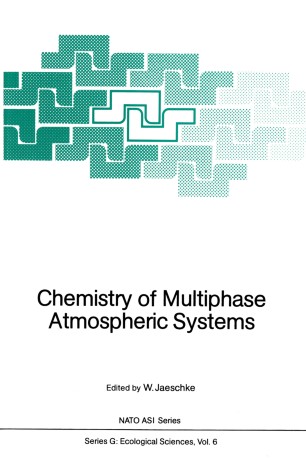 Rapidly increasing interest in the problems of air pollution and source-receptor relationships has led to a significant expansion of knowledge in the field of atmospheric chemistry. In general the chemistry of atmospheric trace constituents is governed by the oxygen content of the atmosphere. Upon entering the atmosphere in a more or less reduced state, trace substances are oxidized via various pathways and the generated products are often precursors of acidic compounds. Beside oxidation processes occurring in the gas phase, gaseous compounds are often converted into solid aerosol particles. The various steps within gas-to-particle conversion are constantly interacting with condensation processes, which are caused by the tropospheric water content. Thus in addition to the gaseous state, a liquid and solid state exists within the troposphere. The solid phase consists of atmospheric conversion products or fly ash and mineral dust. The liquid phase consists of water, conversion products and soluble compounds. The chemistry occurring within this system is often referred to as hydrogeneous chemistry. The chemist interprets this term, however, more strictly as reactions which occur only at an interphase between phases. This, however, is not always what happens in the atmosphere. There are indeed heterogeneous processes such as reactions occurring on the surface of dry aerosol particles. But apart from these, we must focus as well on reactions in the homogeneous phase, which are single steps of consecutive reactions running through various phases.