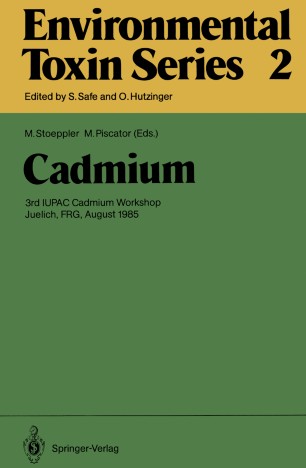 On May 25,1978, the Commission on Toxicology ofthe Division of Clinical Chemistry of the International Union of Pure and Applied Chemistry (IUPAC) established its Subcommittee on Environmental and Occupational Toxicology of Cadmium following aseries of Commission meetings in Kristiansand, Norway. I was appointed chairman ofthe new Subcommittee by the Commission on Toxicology (chairman at that time F. w. Sun­ derman Jr. ) in which I served from 1977 as an Associate Member and from 1979 as a Titular Member. From the beginning the Cadmium Subcommittee aimed not only at bringing together cadmium experts from around the world for scientific discussions but also at assessing, improving and the harmonization of analysis of cadmium. Due to the membership of many laboratories of the world engaged in scientific and analytical work on cadmium, and following some preliminary studies in a few laboratories from Sweden, The Netherlands and the Federal Republic of Germany, the Cadmium Subcommittee conducted from 1979 to 1985 four international interlaboratory surveys on cadmium analysis in body fluids. Two studies have been performed for cadmium in human and lyophilized bovine blood (1979 to 1980 and 1981) and another two for cadmium in artificial and human urines (1983 and 1985). At present in collaboration with the Selenium Subcommittee and the Subcommittee on Harmonization of Methods, a 5th survey for cadmium, lead and mercury in lyophilized human blood and serum reference materials is con­ ducted.