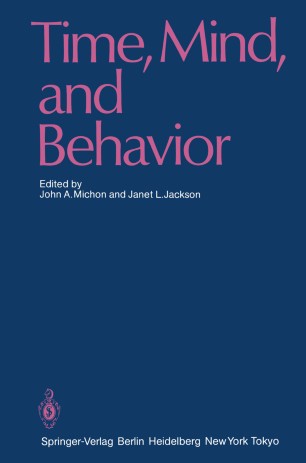 This book is the result of the International Workshop on Time, Mind, and Behavior, which was held at the University of Groningen in September 1984. The aim of the workshop was to produce an up to date review of the state of the art in the field of time psychology. The rapid development of a cognitive outlook in experimental psychology has, among other things, un­ derlined the need for a reconsideration of time experience, the coding and representation of temporal information, and the timing of complex re­ sponses. Since the publication of Paul Fraisse's classical Psychologie du Temps in 1957, time psychology has slowly but steadily drawn an in­ creasing amount of attention, to a point where it now seems to be incorpo­ rated into the mainstream of research. At the same time a noticeable ten­ dency for a renewed general interest in time can also be traced in several other disciplines. These two observations supported our belief that it was time for a review of the sort we had in mind. At the close of 1983 we completed a project supported by the Dutch Organization for the Advancement of Pure Research in which we had stud­ ied the coding and retrieval of temporal information. This provided us with a plausible pretense for organizing a workshop. Around Christmas time 1983 we were able to mail a preliminary invitation to a number of our colleagues whom we knew to be currently active in the field.