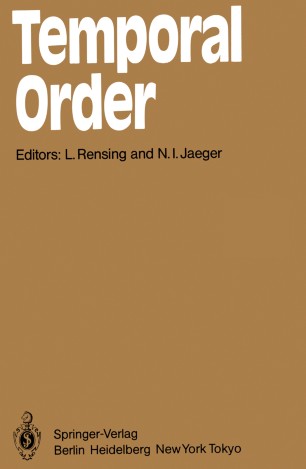 Proceedings of a Symposium on Oscillations in Heterogeneous Chemical and Biological Systems, University of Bremen, September 17–22, 1984

This volume contains the lectures and contributions presented at the International Symposium on Temporal Order held in Bremen, September 17-22, 1984. Temporal order, such as a more or less regularly repeated temporal sequence of events, can evol ve in open systems far removed from equi 1 i bri um. Progress duri ng the last decade in the analysis and the modelling of this complex phenomenon in both biological and chemical systems gave rise to the idea of a joint conference. The purpose of the symposium was to stimulate future work by enhancing the exchange of experimental and theoretical results between neighbouring disciplines. Theoretical work in general, and mathematical models in particular, provided the basis for a mutual discussion and, thus, helped to overcome difficulties in under­ standing the results of different experimental fields. Chemical systems, for examp­ le, are more rigorously controllable through their experimental conditions in com­ parison to biological systems, which maintain highly effective autonomous control against environmental influences. Therefore, different states such as bistability, oscillations and chaos can be defined and, hence, described better in chemical sy­ stems. Chemical systems may thus provide some insights into functional structures that also exist in more complex biological systems.