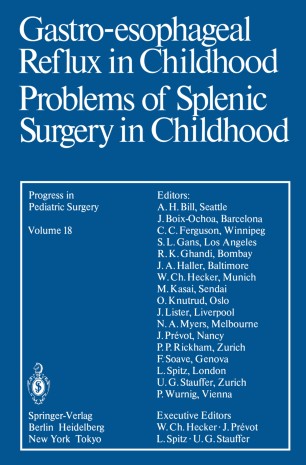 In 1968 the first contacts were arranged with the publishing house of Urban & Schwarzenberg concerning the establishment of a periodical to be produced in English with the aim of publishing important scientific work in pediatric surgery and related disciplines. I thought especially of certain excellent inaugural disser­ tations and theses. When Urban & Schwarzenberg promised to start such a series, I recruited Peter Rickham, then in Liverpool and now in Zurich, and Jean Prevot of Nancy as executive editors. We chose the title Progress in Pediatric Surgery - Fortschritte del' Kinderchirurgie - Acquisitions en Chirurgie Enfantile as the name of our new series. The first volume was published in 1970, followed by another 16 volumes during the next 14 years. At the suggestion of Michael Urban, we turned from the publication of long papers to theme-based volumes, which proved to be extraordinarily useful. Mr. Urban, the head of Urban & Schwarzenberg, told us in 1982 that his firm could no longer look after Progress in Pediatric Surgery. With the agreement of Mr. Urban, we had to look for another' publisher and found Springer-Verlag, who agreed to continue publishing Progress in Pediatric Surgery in the approved lay-out. We cordially thank Dietrich G6tze of Springer-Verlag for his helpful support. This volume (No. 18) is the first of Progress in Pediatric Surgery to appear under the guidance of Springer-Verlag. We want to express our thanks to Mr. Urban and Dr.