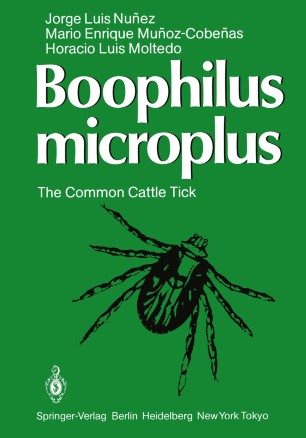 A detailed tracing, from acceptable sources, of archaeological and paleontologi­ cal discoveries made up to the present time leads us to suppose that approximate­ ly in 8000 y B. C., in Southern Turkestan, man succeeded in domesticating the first cattle, which he later took with him as he migrated from this remote region of Central Asia. Step by step, Europe and Asia have been gradually inhabited by domesticated cattle which have been incorporated into man's economy, both as a source of food and work. The same happened in America and Australasia, continents where cattle were taken by the European colonizing groups during the course of the 16th to the 18th centuries. Possibly the common cattle tick also reached these continents at the same time, accompanying its most frequent host. The cattle tick, Boophilus microplus, parasitizes Asiatic cattle races (with spe­ cial reference to the zebu, Bos indicus), but generally the level of infestation is not high, only a few engorged females being detected, generally no more than ten. When cattle of European races are infested by Boophilus microplus, how­ ever, the level of parasitism is higher, sometimes reaching limits incompatible with the life of the host.