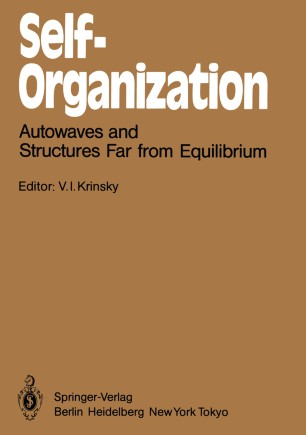 According to its definition, Synergetics is concerned with systems that produce macroscopic spatial, temporal, or functional structures. Autowaves are·a specific, yet very important, case of spatio-temporal structures. The term "autowave" was coined in the Soviet Union in analogy to the term "auto-oscillator". This is - perhaps too literal - translation of the Russian word "avto-ostsillyatory" (= self­ oscillator) which in its proper translation means "self-sustained oscillator". These are oscillators, e. g. , clocks, whose internal energy dissipation is compensa­ ted by a (more or less) continuous power input. Simi larly, the term "autowaves" de­ notes propagation effects - including waves - in active media, which provide spa­ tially distributed energy sources and thus may compensate dissipation. An example which is now famous is represented by spiral or concentric waves in a chemically active medium, undergoing the Belousov-Zhabotinsky reaction. This book provides the reader with numerous further examples from physics, chem­ istry, and biology - e. g. , autowaves of the heart. While the Belousov-Zhabotinsky reaction is now widely known, a number of very important results obtained in the Soviet Union are perhaps less well known. I am particularly glad that this book may help to make readers outside the Soviet Union acquainted with these important exper­ imental and theoretical findings which are presented in a way which elucidates the common principles underlying this kind of propagation effects. Professor V.