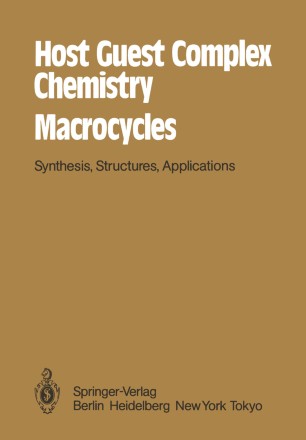 The scientific and practical interest in coronands (crown ethers), cryptands, podands as complexing agents for cations as well as for anions and neutral low molecular species is undeniable 1,2). The chemistry of crown compounds is steadily increasing. About 250 original papers dealing with crown chemistry appeared only in 1980. New molecules· with crown ether properties are constantly synthesized and new applications discov,?red. Owing to lack of space, only a small number of the original publications is men­ tioned here. Thus, in the literature compilation only some, but relevant works are selected for each chapter. Whenever possible, reference is made to reviews or review-like articles alone by means of which origin,al works can be consulted. The reviews given under ref. 1) are considered to be the most relevant. The formulae presented in the figures should be understood as representative structures outlining a specific field. 2 Classification of Oligo-/Multidentate Neutral Ligands and of their Complexes Today, a distinction is made between the classical ring oligoethers (crown ethers) and monocyclic coronands, oligocyclic spherical cryptands and the acyclic podands with respect to topological aspects 3). This classification and the topology are illustrated in Fig. 1, each figure representing the minimum number of donor atoms and chain segments characteristic of each class of compounds. Multidentate mono­ cyclic ligands with any type of donor atoms are called coronands ("crown compounds"), while the term crown ether should be reserved for cyclic oligoethers exclusively containing oxygen as donor atom.