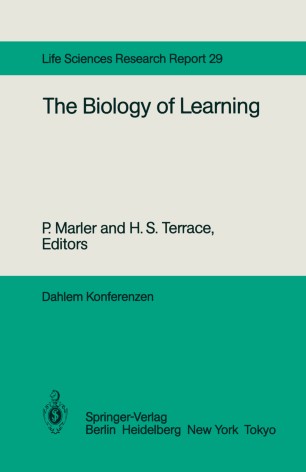 The Biology of Learning

Report of the Dahlem Workshop on the Biology of Learning Berlin, 1983, October 23–28

P. Marler* and H. S. Terrace** *The Rockefeller University Field Research Center Millbrook, NY 12545 **Dept. of Psychology, Columbia University New York, NY 10027, USA For the first half of this century, theories of animal conditioning were regarded as the most promising approach to the study of learning - both animal and human. For a variety of reasons, disillusionment with this point of view has become widespread during recent years. One prominent source of disenchantment with conditioning theory is a large body of ethological observations of both learned and unlearned natural behavior. These challenge the generality of principles of animal learning as derived from the intensive study of a few species in specialized laboratory situations. From another direction, the complexities of human language acquisition, surely the most impressive of learned achievements, have prompted developmental psychologists to doubt the relevance of principles of animal learning. Even within the realm of traditional studies of animal learning, it has become apparent that no single set of currently available principles can cope with the myriad of new empirical findings. These are emerging at an accelerating rate from studies of such phenomena as selective attention and learning, conditioned food aversion, complex problem­ solving behavior, and the nature of reinforcement. Not very surprisingly, as a reaction against the long-held but essentially unrealized promise of general theories of learning, many psychologists have asked an obvious question: does learning theory have a future? 2 r. Marler and B. S.