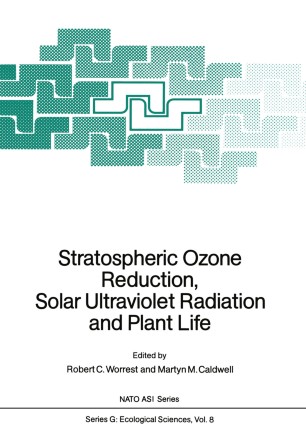 Inadvertent alterations of the earth's atmosphere by man's activities are now of regional and even global proportion. Increasing concern has been focused in the last decade on consequences of acid rain, carbon dioxide enrichment of the atmosphere and reduction of ozone in the upper atmosphere. The latter two problems are of truly global scale. This book focuses on the atmospheric ozone reduction problem and the potential consequences for plant life. unlike carbon dioxide enrichment, reduction of the total atmospheric ozone column has not yet taken place to a noticeable degree -- it is a problem of the future. The processes leading to ozone reduction involve time periods on the scale of decades. However, by the same token, if society finds ozone reduction to be unacceptable it will take even longer for the process to be reversed. Thus, anticipation of the consequences of ozone reduction is of obvious importance. Speculation of the possibility of ozone reduction first appeared in the early 1970's and was focused on the consequences of the injection of large quantities of nitrogen oxides into the upper atmosphere by supersonic aircraft flying at high altitudes. Other sources of nitrogen oxides originating from the earth's surface were also considered. With further refinement, the concerns of nitrogen oxide pollution of the upper atmosphere were diminished since the quantities likely to be involved were insufficient to cause a serious threat to the ozone layer.