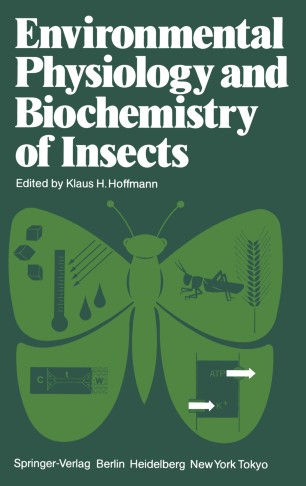 Environmental Physiology and Biochemistry of Insects

Of all the zoological classes the insects are the most numerous in species and the most varied in structure. Estimates of the number 18 of species vary from 1 to 10 million, and 10 individuals are es­ timated to be alive at any given moment. In their evolution, in­ sects are relatively ancient and, therefore, they have proved to be a phenomenally successful biological design which has survived unchanged in its basic winged form during the last 300 m. y. In­ sects were the first small animals to colonize the land with full suc­ cess. Their small size opened many more ecological niches to them and permitted a greater diversification than the vertebrates. What is it about this design that has made insects so successful in habitats stretching from arid deserts to the Arctic and Antarctic and from freshwater brooks to hot springs and salines? Is it due to the adapta­ bility of their behavior, physiology, and biochemistry to changing environmental conditions? Three features of insects are of particular importance in determin­ ing their physiological relationship with the environment: their small size, as mentioned above, the impermeability and rigidity of their exoskeleton, and their poikilothermy. Of course, as with any other animals, the insects' success in its environment depends on its ability to maintain its internal state within certain tolerable limits of temperature, osmotic pressure, pH or oxygen concentra­ tion (homoeostasis).