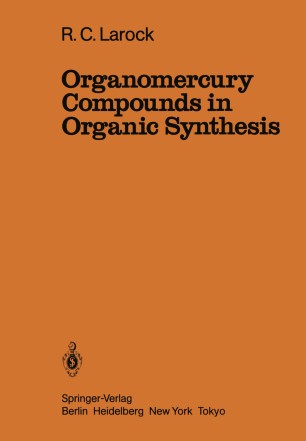 The field of organometallic chemistry has enjoyed explosive growth in recent years. During this time a rapidly increasing number of metals have found utility in organic synthesis as the corresponding organometallic compounds. The sub­ ject of "Organic Synthesis by Means of Transition Metal Complexes" was reviewed in the first volume of this series of monographs. This volume deals primarily with the appli­ cation of organomercury compounds in organic synthesis (exclusive of solvomercuration-demercuration reactions), but will of necessity involve a number of reactions of other organometallics as well. Organomercurials are among the oldest known organo­ metallics and were perhaps the first to have an entire book devoted to their chemistry, when Whitmore wrote an American Chemical Society monograph on the subject in 1921. Subsequently, two very detailed monographs on the subject have appeared. In 1967 "The Organic Compounds of Mercury", volume 4 in the series "Methods of Elemento­ Organic Chemistry" appeared and this was followed in 1974 by Houben Weyl's full volume, Band XIII/2b, devoted entirely to the organometallic compounds of mercury. These books cover the entire field of organomercury chemistry.