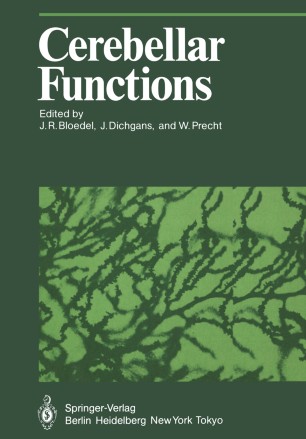 Over the past few semesters a group of neurologists, neurophysiologists, and brain theorists in various departments of Tlibingen University have gathered periodically in an effort to review ideas and evidence on cerebel­ lar functions. At times, general solutions seemed close, when credit was given to various theoretical proposals advanced since the early days of cer­ ebellar physiology, however, it became clear in every case that a large part of the available facts refused to submit to the general ideas. As believers in the power of scientific discussion, we felt that the time was ripe for posing the problem of the cerebellum once more to a well­ articulated group of specialists that would include proponents of every disparate point of view. The sponsorship of the Max Planck Society and of the Deutsche Forschungsgemeinschaft, to whom we express our profound gratitude, made it possible to organize an international meeting in Septem­ ber, 1983. The aim of making new, even extravagant ideas palatable to each other was well accomplished by the participants. We trust that some of the ensuing excitement has been carried over into the printed version.