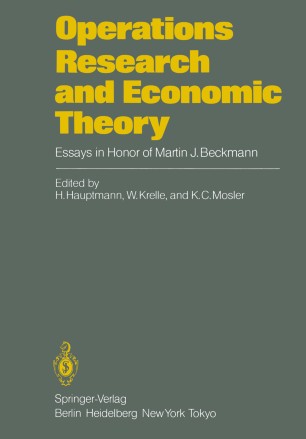 Martin Beckmann is going to celebrate his sixtieth birthday. This is almost unbelievable considering the vitality, ingenuity, and activity which he continues to show as he always did. It is an honor­ able and pleasant duty for the whole economics community to show hirn the respect, gratitude, and affection which he deserves. Thus, those' who have contributed to this festschrift may be thought of as a dele­ gation from a much larger community in which all of us are joined; the editors in particular feel deeply connected with and enriched by the personality and scientific work of Martin Beckmann. Martin Beckmann is one of those rare scholars who are not narrow­ minded specialists in one field; he has been active in many areas of economics and operations research which rapidly developed since World War 11, and he has contributed original and fruitful ideas in almost all of them. The variety of topics treated in this volume aims to re­ flect the impressive width of his scientific interests.