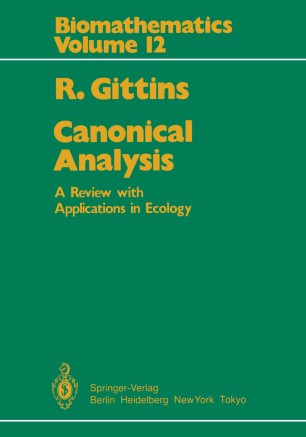 A Review with Applications in Ecology

Relationships between sets of variables of different kinds are of interest in many branches of science. The question of the analysis of relationships of this sort has nevertheless rather surprisingly received less attention from statisticians and others than it would seem to deserve. Of the available methods, that address­ ing the question most directly is canonical correlation analysis, here referred to for convenience as canonical analysis. Yet canonical analysis is often coolly received despite a lack of suitable alternatives. The purpose of this book is to clarify just what may and what may not be accomplished by means of canoni­ cal analysis in one field of scientific endeavor. Canonical analysis is concerned with reducing the correlation structure be­ tween two (or more) sets of variables to its simplest possible form. After a review of the nature and properties of canonical analysis, an assessment of the method as an exploratory tool of use in ecological investigations is made. Applications of canonical analysis to several sets of ecological data are described and discussed with this objective in mind. The examples are drawn largely from plant ecology. The position is adopted that canonical analysis exists primarily to be used; the examples are accordingly worked through in some detail with the aim of showing how canonical analysis can contribute towards the attainment of ecological goals, as well as to indicate the kind and extent of the insight afforded.