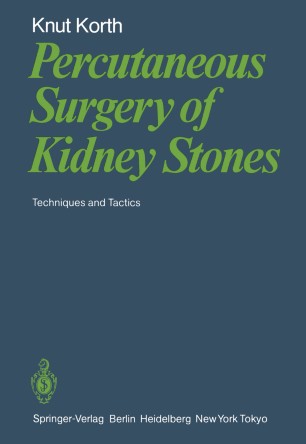 In recent years the treatment of kidney stones has taken on a new dimension, thanks to modem techniques. E. Schmiedt and Ch. Chaussy revolutionized the therapy of kidney stones with their extra­ corporeal shockwave lithotripsy. After percutaneous fistulization of the renal cavities by ultrasonically controlled puncture became a rou­ tine procedure, the obvious next step was to use the same approach, after dilating the track, to carry out intrarenal operations. Dr. Knut Korth has been using this operative technique for some time now. He has gained a great deal of experience, having treated hundreds of patients who have come to him from all parts of Europe. In this book he describes the endoscopic technique which he has used in 400 cases. He does not attempt to compare and contrast his method with others, but rather describes and discusses the route he has taken. The book hence takes on a very subjective character - in the positive sense of the word. Dr. Korth believes - and emphasi­ zes - that puncture should be performed by the urologist himself so that the final responsibility for an operation is not divided. Our own experience in exclusively urological operations without the help of a radiologist confirm this position. Korth has developed many ideas - some in the form of instru­ ments - for transcutaneous operations. He describes in detail the various procedures according to the type of stone, providing nume­ rous examples.