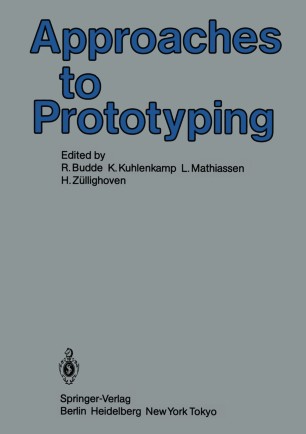 "This conference will focus on the user-oriented development of information systems. Against a background of recent concepts for the implementation of distributed systems based on workstation computers, various communicational, organizational and social issues gain increasing importance in the construct ion of computer based information systems. There is an urgent need to integrate end-users and other affected groups into the development process. New strategies for system development are thus needed. " This was the beginning of the Call for Papers to the Working Conference on Prototyping. Working in the fields of user-oriented software construct ion and the analysis of communication problems between developers and users we, that is the GMD­ team involved in this conference and in preparing its Proceedings, sooner or later came across various new concepts to overcome the problems sketched above. Concepts focusing on the quick construct ion of an operative system such as "rapid prototyping" or concepts aiming at the human and organizational side of the development process such as "Systemeering". Even on a second look, the multitude of different approaches, terms and tools still caused confusion. But despite the differences every concept seemed to have something to do with "Prototyping". This, however, proved to be of little help to us, because the term "Prototyping" itself turned out to be quite "fuzzy". In this obviously confused situation we decided that it was time for a working con­ ference.