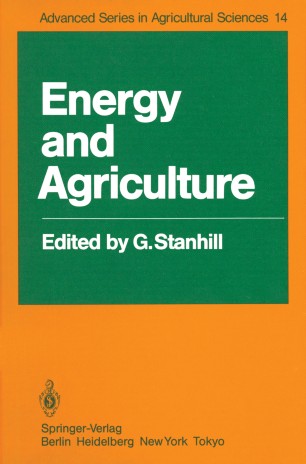 Energy and agriculture are both extremely broad subjects and their interactions - the subject of this book - cover almost the full spectrum of the agricultural sciences. Yet the subject is a relatively new one whose importance first received widespread recognition barely a decade ago, following the dramatic increase in oil prices during 1973. The impact of this increase was such as to promote a world-wide debate on the future direction that agriculture should take. This debate was, and is, of particular concern in countries where agriculture plays a leading role in economic and social development. During the last half century many national agricultural systems have been transformed from almost closed, self-sufficient systems with few locally produced inputs geared to satisfy local requirements, to intensive, open systems, utilizing large quantities of energy-rich inputs such as fossil fuel for manufactured agro-chemicals, water distribution and imported animal feedstuffs to produce a range of sophisticated products, often for export, which in tum require many energy-rich inputs for their marketing. This industrialization of agriculture has proved to be very successful in many respects and indeed was accepted as a general model for agricultural development allowing increased productivity and efficiency per unit land, labor and water, even in areas with limited natural resources.