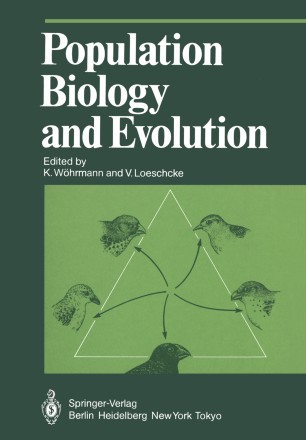 This volume contains the papers presented at a symposium on popula­ tion biology sponsored by the Deutsche Forschungsgemeinschaft. It was . held at the guest house of the University of Ttibingen at Oberjoch on May 15-19, 1983. Prior to this conference a small group of European biologists had met in Berlin (June 1981) and Pavia (September 1982) to discuss re­ search problems on the borderline between population genetics and evolutionary ecology. From the contributions and discussions at these meetings it became evident that the unification of approaches to evolutionary problems in population genetics and evolutionary ecology has not yet been suc­ cessful and requires further efforts. It was the consensus that a larger symposium with international participation would be helpful to con­ front and discuss the different approaches to population biology in order to assess "where we are now" and "where we should be going. " As a result an organizational committee was formed (F. Christiansen, S. Jayakar, V. Loeschcke, W. Scharloo, and K. W6hrmann) to iden­ tify topics that seemed, at least to them, to be fruitful in tackling problems in population biology. Consequently, a number of colleagues were asked to participate in the meeting. We have divided this book into chapters corresponding to the eight topics chosen. The volume begins with the relation between genotype and phenotype and is followed by a chapter on quantitative genetics and selection in natural populations.