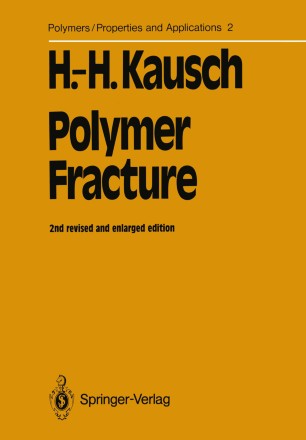 The first edition of this book had been written with the special aim to provide the necessary information for an understanding of the deformation and scission of chain molecules and its role in polymer fracture. In this field there had been an intense ac­ tivity in the sixties and early seventies. The new results from spectroscopical (ESR, IR) and fracture mechanics methods reported in the first edition had complemented in a very successful way the conventional interpretations of fracture behavior. The extremely friendly reception of this book by the polymer community has shown that the subject was timely chosen and that the treatment had satisfied a need. In view of the importance of a molecular interpretation of fracture phenomena and of the continued demand for this book which still is the only one of its kind, a second edition has become necessary. The aims of the second edition will be similar to those of the first: it will be at­ tempted to reference and evaluate completely the literature on stress-induced chain scission, now up to 1985/86. References on other subjects such as morphology, vis­ coelasticity, plastiC deformation and fracture mechanics, where the treatment was never meant to be exhaustive, have remained selective, but they have been updated.