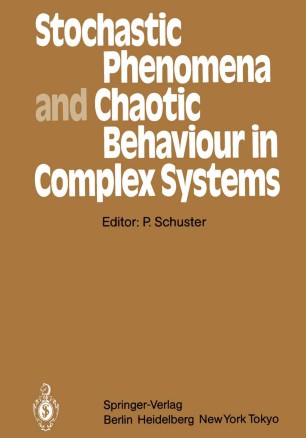 This book contains all invited contributions of an interdisciplinary workshop of the UNESCO working group on systems analysis of the European and North American region entitled "Stochastic Phenomena and Chaotic Behaviour in Complex Systems". The meeting was held at Hotel Winterthalerhof in Flattnitz, Karnten, Austria from June 6-10, 1983. This workshop brought together some 20 mathematicians, physicists, chemists, biologists, psychologists and economists from different European and American coun­ tries who share a common interest in the dynamics of complex systems and their ana­ lysis by mathematical techniques. The workshop in Flattnitz continued a series of meetings of the UNESCO working group on systems analysis which started in 1977 in Bucharest and was continued in Cambridge, U.K., 1981 and in Lyon, 1982. The title of the meeting was chosen in order to focus on one of the current problems of the analysis of dynamical systems. A deeper understanding of the vari­ ous sources of stochasticity is of primary importance for the interpretation of experimental observations. Chaotic dynamics plays a central role since it intro­ duces a stochastic element into deterministic systems.