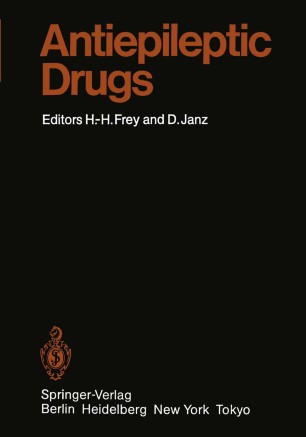 Epileptic disorders need treatment for many years or even for life, and this makes a thorough understanding of the pharmacokinetics and possible hazards and side effects of the drugs used in treatment mandatory. During recent decades our knowledge in this field has considerably increased, not least as a result of the development of specific and sensitive methods for the determination of anti­ epileptic agents in biological material. The clinical pharmacology of this group of drugs has been studied extensively and can today be regarded as well established. This does not necessarily mean that drug treatment of epilepsy is without problems. For example, it has recently been shown that one of the newer anti­ epileptic drugs, greeted with great enthusiasm by clinicians, may in rare instances induce serious damage to the liver and the pancreas, and seems even to have a certain teratogenic potential. Clinical problems should be understood as a challenge to the experimental pharmacologist, who should try to find explanations for the clinical hazards, and, if possible, show new ways in which better drugs might be developed. In recent years interest has focused on the importance of the inhibitory transmitter 'l'-aminobutyric acid (GABA) in the pathophysiology of epilepsy, and there have been a series of attempts to find useful antiepileptic drugs among substances interfering with GABA metabolism in the CNS.