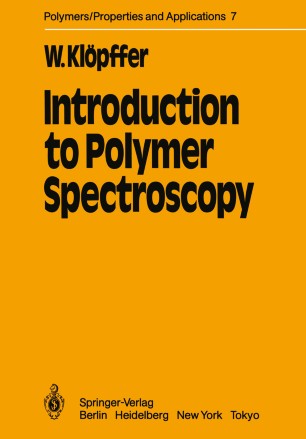 This book has grown out of several courses oflectures held at the University of Mainz in the years 1978 to 1981, at the Ecole Poly technique Federal, Lausanne, and at the University of Fribourg, Switzerland. The last two courses were held in the framework of the "3e Cycle" lectures in June 1981. According to this genesis, the emphasis of the book lies on a unified and concise approach to introducing polymer spectroscopy rather than on completeness which, by the way, could hardly be achieved in a single volume. In contrast to other books on this subject, equal weight is given to electronic spectroscopy, vibrational spectroscopy and spin resonance techniques. The electronic properties of polymers have been increasingly investigated in the last ten years; until recently, however, these studies and the spectroscopic methods applied have not generally been considered as part of polymer spectroscopy. The increasing use of electronic spectroscopy by polymer researchers, on the other hand, shows that this type of spectroscopy provides efficient tools for gaining insight into the properties of polymers which cannot be obtained by any other means.