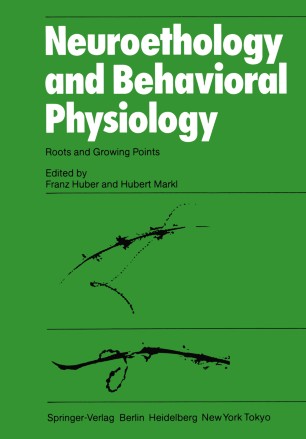 The investigation of the relationships between a behavior pattern and its underlying sensory and neurophysiological mechanisms in both man and animals dates back well into the last century. However, the concepts and findings of ethology and experimental psychology, together with an improved understanding of how the nervous system is organized and how neurons interact with each other, have only in the last 30 years laid the groundwork for an in-depth analysis. The many technological advances achieved in neurophysiology and neuroanatomy have also played an important role in this. The study of the neuronal bases of behavior - for which the term "neuroethology" has been coined - has thus become one of the central themes of neuroscience. Kenneth David Roeder, who died in 1979, was one of the pioneers of this field of research. It is to him that the contributions in this book are dedicated. K.D. Roeder was among the first to attempt to define the correlation between the natural behavior of an experimental animal and the activity of single sensory and nerve cells. The ques­ tions he asked, his experimental approach, and his fundamental discoveries are pre­ sented in an introductory chapter.