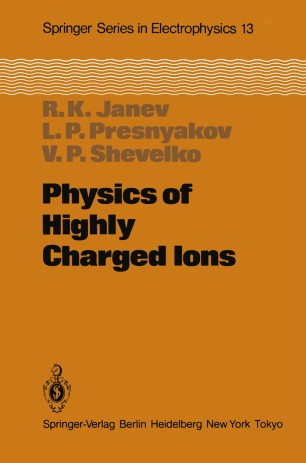 The physics of highly charged ions has become an essential ingredient of many modern research fields, such as x-ray astronomy and astrophysics, con­ trolled thermonuclear fusion, heavy ion nuclear physics, charged particle ac­ celerator physics, beam-foil spectroscopy, creation of xuv and x-ray lasers, etc. A broad spectrum of phenomena in high-temperature laboratory and astrophysical plasmas, as well as many aspects of their global physical state and behaviour, are directly influenced, and often fully determined, by the structure and collision properties of multiply charged ions. The growth of in­ terest in the physics of highly charged ions, experienced especially in the last ten to fifteen years, has stimulated a dramatic increase in research activity in this field and resulted in numerous significant achievements of both fun­ damental and practical importance. This book is devoted to the basic aspects of the physics of highly charged ions. Its principal aim is to provide a basis for understanding the structure and spectra of these ions, as well as their interactions with other atomic par­ ticles (electrons, ions, atoms and molecules). Particular attention is paid to the presentation of theoretical methods for the description of different radi­ ative and collision phenomena involving multiply charged ions. The exper­ imental material is included only to illustrate the validity of theoretical methods or to demonstrate those physical phenomena for which adequate theoretical descriptions are still absent. The general principles of atomic spectroscopy are included to the extent to which they are pertinent to the subject matter.