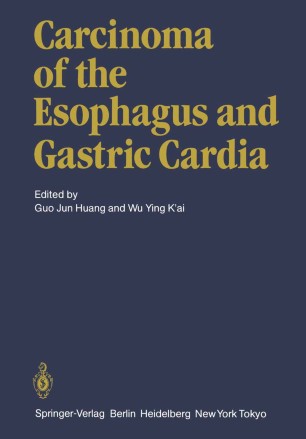 Carcinoma of the Esophagus and Gastric Cardia

This book has its roots in a monograph on cancer of the esophagus and gastric cardia edited by us in 1965 and published in Chinese on­ ly. Along with a number of colleagues in various fields, we summa­ rized our work in the epidemiology, pathology, diagnosis, radiother­ apy, and surgery of carcinoma of the esophagus and gastric cardia, carried out chiefly at Peking Union Medical College Hospital, Fu­ wai Hospital, and the Cancer Institute of the Chinese Academy of Medical Sciences during the 25 years from 1939 to 1964. In the 18 years since the publication of that monograph, further progress has been made in China in various aspects of research and surgical treatment. Abundant material has been accumulated on the long­ term results of surgery, and a number of newer principles and meth­ ods for diagnosis and management have been evolved. In order to meet the need for the exchange of scientific and technical informa­ tion, both domestically and internationally, we have invited a group of our current colleagues working on the different aspects of carci­ noma of the esophagus and gastric cardia to contribute to the pre­ sent volume, which is being printed in both Chinese and English. The Chinese edition, like the original monograph, is being publish­ ed by Shanghai Science and Technology Publishers. Through the kind invitation of Dr. Heinz Gotze, the English text is being publish­ ed for international circulation by Springer-Verlag.