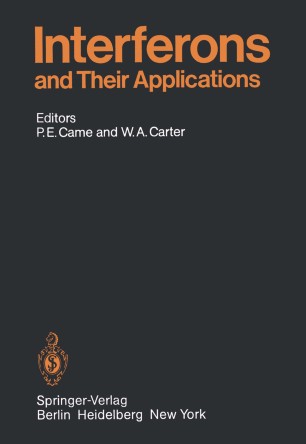 Interferons and Their Applications

Today, the basic mood of researchers and clinical investigators, both at the center and on the periphery of interferon studies, is optimistic regarding the future of interferons as therapeutic substances. Many also feel these polypeptides will prove invaluable probes in unraveling certain fundamental biochemical processes which control the life cycle and developmental pattern of many human cells. In contrast, only a year or two ago, this optimism had given way to an attitude almost of disenchantment as public and scientific expectations were raised steeply, then rapidly waned, as it turns out, prematurely. Both the mUltiple actions of interferons (a virtual cascade of biochemical reactions may be induced, as documented herein) and the high visibility of interferon research provided by the millions of dollars invested both by national health agencies and by multinational pharmaceutical companies, contributed to an upsweep in public attention to drug development probably unprecedented in this century. Virtually every oncologist, it would seem, was plagued by requests for the experimental agent, although they already had therapies of more proven value. As recently as 1980, even though interferon had achieved success against certain cancers and certain viral diseases, the variability in clinical results was seemingly ever present and little evidence emerged to suggest interferons could cure advanced diseases. Why then the resurgence of an optimistic mood? There are almost always many elements which contribute to happiness, and this is certainly true of the broad frontier of interferon and its place in biochemical research and treatment.