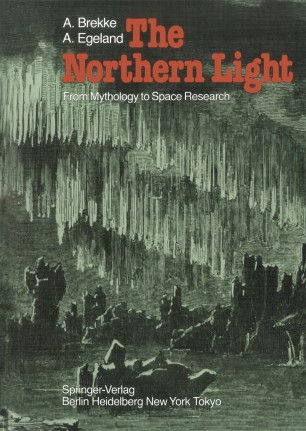 From Mythology to Space Research

In Nordic literature a remarkable discussion of the northern light appears in Kongespeilet (The King's Mirror) a thirteenth-century Norwegian chronicle. It is described in vivid detail as the following translated excerpts demonstrate: These northern lights have this peculiar nature, that the darker the night is, the brighter they seem, and they always appear at night but never by day, most frequently in the densest darkness and rarely by moonlight. In appearance they resemble a vast flame of fire viewed from a great distance. It also looks as if sharp points were shot from this flame up into the sky; these are of uneven height and in constant motion, now one, now another darting highest; and the light appears to blaze like a living flame. Three different theories for the origin of the northern light were suggested in this book. Numerous naturally occurring heavenly phenomena have been observed and enjoyed as long as the Earth has been inhabited, but hardly any of them has stirred man's imagination, curiosity and fear as much as the northern light. The northern light is certainly one of the most spectacular of nature's phenomena.