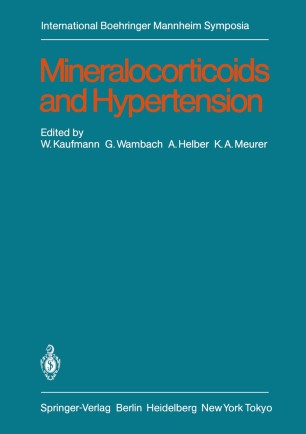 On behalf of the organizing committee of this symposium, I would like to wel­ come you to Cologne and thank you very much for coming. We appreciate that some of the leading scientists in the field of hypertension have accepted our invi­ tation to participate actively at this conference. Our first symposium on renin-angiotensin, aldosterone, and hypertension took place at Titisee in the Black Forest in 1967. The second one, on the renin-angio­ tensin-aldosterone system under the influence of therapeutic procedures, was held at the same place in 1970. Five years later in 1975 at a third symposium in Cologne, we discussed the problems of central nervous control of sodium balance in relation to the renin-angiotensin system. The symposium about to begin is devoted to the significance of mineralocorti­ coids in developing and sustaining arterial hypertension. 1) In order to provide a physiologic background for the understanding of the mechanisms involved in this complicated process, new concepts on the regulation of mineralocorticoid secretion must be discussed in detail. As the most important mineralocorticoid, aldosterone is regulated by changes in sodium and potassium homeostasis and is also influenced by adrenocorticotropic hormone (ACTH).