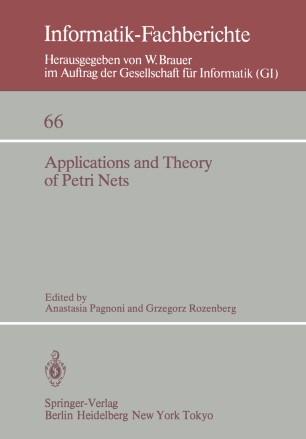 Applications and Theory of Petri Nets

Selected Papers from the 3rd European Workshop on Applications and Theory of Petri Nets Varenna, Italy, September 27–30, 1982 (under auspices of AFCET, AICA, GI, and EATCS)

This volume presents a selection of papers presented at the 3rd European Workshop on Appl ications and Theory of Petri Nets that took place in Villa Monastero, Varenna (Italy) in the period September 27 - September 30, 1982. The I ist of topics included: nets and related models, mathematical analysis of nets, transformations and morphisms of nets, formal languages and nets, parallel program verification and nets, the pro­ blem of time in nets, programming languages based on nets, applications to distributed systems, applications to realtime systems, software ~~gineering, hardware design and its implementation, recoverability problems, nets and formal semantics; net tools. The diversity of topics on this list witnesses the fact that the researchers from very different areas presented their contributions and discussed various research problems during the workshop. This interaction of scientists looking at the area of Petri nets from very different points of view makes this series of workshops interesting and worthwi le. The volume documents the progress of the research concerning Petri nets during a one­ year time from the 2nd European Workshop held in Bad Honnef in 1981. We think that this was a substantial progress indeed. This observation is even more pleasant if one real izes that during the workshop in Varenna we have celebrated 20 years of "existence" of Petri nets (the seminal work by prof. C.A. Petri appeared precisely 20 years ago). We are very proud to present an invited address by prof. C.A. Petri in this volume.