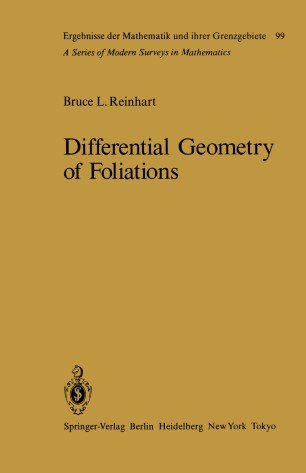 Whoever you are! How can I but offer you divine leaves . . . ? Walt Whitman The object of study in modern differential geometry is a manifold with a differ­ ential structure, and usually some additional structure as well. Thus, one is given a topological space M and a family of homeomorphisms, called coordinate sys­ tems, between open subsets of the space and open subsets of a real vector space V. It is supposed that where two domains overlap, the images are related by a diffeomorphism, called a coordinate transformation, between open subsets of V. M has associated with it a tangent bundle, which is a vector bundle with fiber V and group the general linear group GL(V). The additional structures that occur include Riemannian metrics, connections, complex structures, foliations, and many more. Frequently there is associated to the structure a reduction of the group of the tangent bundle to some subgroup G of GL(V). It is particularly pleasant if one can choose the coordinate systems so that the Jacobian matrices of the coordinate transformations belong to G. A reduction to G is called a G-structure, which is called integrable (or flat) if the condition on the Jacobians is satisfied. The strength of the integrability hypothesis is well-illustrated by the case of the orthogonal group On. An On-structure is given by the choice of a Riemannian metric, and therefore exists on every smooth manifold.