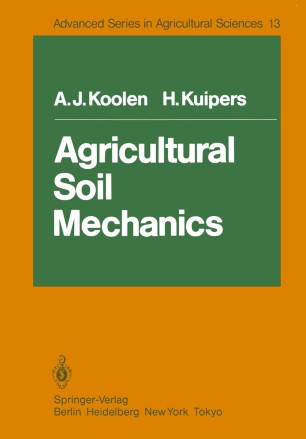 Compared with forces occurring in soil mechanics problems in civil engineering, the forces that are applied to soil in farming operations generally have a short duration, less than a few seconds, a small loaded area, no more than a few square decimeters, and small intensities, 10 bar being a high value. On the other hand, soil properties vary widely between those of a weak mud and a stone-like dry soil. Tillage and related applications of force to soil are practiced worldwide in farming. Tillage operations are performed on one hectare of land for every three human beings. This means that for the food production for each individual daily, something like one cubic meter of soil is stirred, or about 20 times his body weight. Theoretical knowledge of this most common human activity, which largely determines the surface shape of the fertile part of the earth, is still very limited. In this book the authors have tried to give an outline of the present state of the art. One of the starting points was a course in soil dynamics taught by the authors at the Agricultural University at Wageningen, The Netherlands. We hope to reach interested readers who have no more theoretical knowledge than high school level, as well as readers who want to go beyond the level of a third year university student. For the chapter on wheels and tires we received substantial support from F. G. J. Tijink of the Tillage Laboratory at Wageningen.