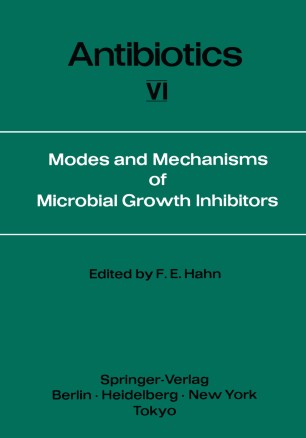 It is not certain that the editors of Antibiotics I (1967), Drs. GOTTLffiB and SHAW, fully realized that they were laying the foundation for an entire series of which we present here Vol. VI. For some time to come, this will be the last volume of the Antibiotics series. There are several reasons for this. Firstly, the discovery of medicinally useful antibiotics has leveled off, because the number of microbiological products with antimicrobial properties is not infinite. In 1972 some 2500 antibiotic substances were known, of which approximately one per cent are clinically useful. Further search for antibiotics has led to increasing frequency of rediscoveries and drasti­ cally decreasing frequency of discoveries of new antibiotics. As the search for antibiotics with a standard methodology in conventional ecological niches has exhausted itself, there is a paucity of new and interesting substances on which to undertake modes/mechanisms of action studies. Secondly, the mechanism of action field has come of age and its results are now academic knowledge. This also holds true for synthetic chemothera­ peutic drugs and becomes the case rapidly for toxic substances with anti-eukar­ yotic action. The study of mechanisms of action was undertaken for two reasons: one was the basic scientific desire to know how antimicrobial substances inter­ fered with microbial biochemistry; the second one was the hope that such infor­ mation would be useful in the premeditated design of synthetic antimicrobials.