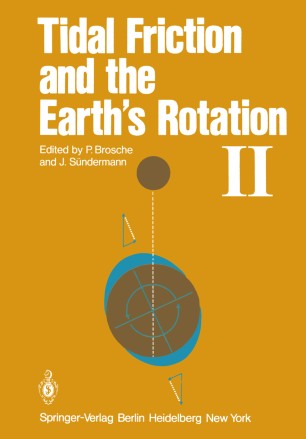 Proceedings of a Workshop Held at the Centre for Interdisciplinary Research (ZiF) of the University of Bielefeld, September 28–October 3, 1981

In the four years which elapsed between our first workshop on .Tidal Friction and the Earth's Rotation and the second, the proceedings of which are presented here, many of the disciplines involved made ad­ vances which we felt should be exchanged. We were encouraged by the good reception our first report met with. Of course, more insight often means more problems. Therefore, this volume contains new results and revisions of matters which previously appeared settled. We are certainly far from "final answers". For this reason, differing opinions on some issues are to be found in this book. Moreover, we have refrained from making mathematical symbols uniform to avoid the risk of errors and non-compatibility with the earlier work of an author. The two workshops have stimulated collaboration between participants working in various fields. The final versions of the contributions have already profited from these discussions. We are convinced that they will also influence further investigations. This advancement of our past and future aims is based on the very existence of the Centre for Interdisciplinary Studies and on the support we have received from its leading members. The authors have agreed to dedicate this book to Dr. H. Gerstenkorn, who died in 1981. He contributed fundamental ideas to the scientific fields treated in the meeting. P. Brosche Daun, September 1982 J. Slindermann Contents * Julius Robert Mayer's Ideas on a Theory of Tidal Friction H.P. Miinzenmayer ...•••.•••..••.•..•...••..•...•.•••.••••....•..