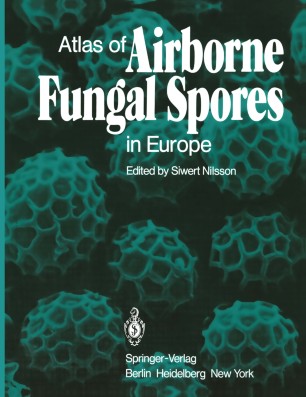 The present atlas is addressed mainly to those who, departing from different spheres of interest, are studying the dispersal of fungus spores in the air, like aero biologists, plant pathologists, medical mycologists, allergologists, or those interested in spore morphology as a taxonomic tool. The steadily increasing interest in air pollution problems has also stimulat­ ed investigations in the microbiological fraction of air pollutants. During the last decades the study of microbial life in the atmosphere has developed to a special branch of biological sciences - aerobiology of which the first studies are from the end of the last century. Besides pollen grains and spores of higher plants and bacteria, fungal diaspores contribute a constant and sub­ stantial part of the airborne microorganisms. Methods for studying airborne spores are described and critically discussed by e. g. Dimmick and Akers (1969), Ingold (1971) and Gregory (1973). The actual content of fungus spores in the air is a result of complicated processes, all of which are influ­ enced by external factors in different ways. The influence of the different meteorological factors on spore formation, liberation, transport and deposi­ tion is essentially discussed by Ingold and Gregory. There are considerable difficulties in identifying detached fungus spores visually. The taxonomy of the fungi is often based on the ontogeny of the spores which cannot be followed by examination of single spores in the air. The conidial development in Deuteromycotina and structure of conidiopho­ res are excellently described and illustrated by Cole and Samson (1979).