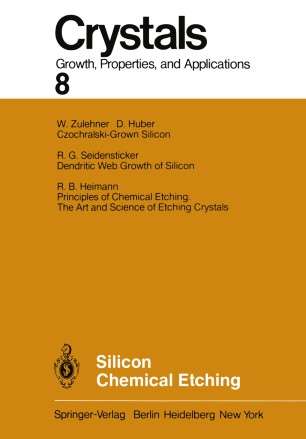 In the first contribution to this volume we read that the world-wide production of single­ crystal silicon amounts to some 2000 metric tons per year. Given the size of present-day silicon-crystals, this number is equivalent to 100000 silicon-crystals grown every year by either the Czochralski (80%) or the floating-zone (20%) technique. But, to the best of my knowledge, no coherent and comprehensive article has been written that deals with "the art and science", as well as the practical and technical aspects of growing silicon­ crystals by the Czochralski technique. The same could be said about the floating-zone technique were it not for the review article by W. Dietze, W. Keller and A. Miihlbauer which was published in the preceding Volume 5 ("Silicon") of this series (and for a monograph by two of the above authors published about the same time). As editor of this volume I am very glad to have succeeded in persuading two scien­ tists, W. Zulehner and D. Huber, of Wacker-Chemitronic GmbH - the world's largest producer of silicon-crystals - to write a comprehensive article about the practical and scientific aspects of growing silicon-crystals by the Czochralski method and about silicon­ wafer manufacture. I am sure that many scientists or engineers who work with silicon­ crystals -be it in the laboratory or in a production environment - will profit from the first article in this volume.