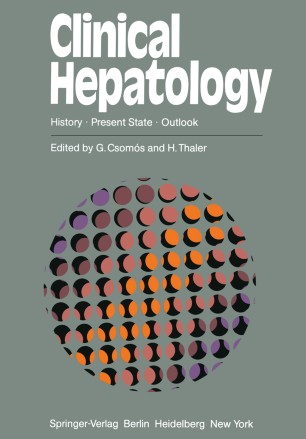 Hepatology has come of age in the last decades. Biology of the liver has flour­ ished long before. As the largest homogeneous organ of the body the liver served as useful model in the development of biochemistry and related discip­ lines. Only gradually were these biological investigations applied to the clinical study of liver disease. This was particularly stimulated by the recognition that in the greater part of the world, the developing countries and what we now call the Third World, liver disease represents a major threat to overall public health. It leads to morbidity and mortality of persons in their productive years from liver cancer, cirrhosis and parasitic disease, particularly, schistosomiasis. Moreover, the growing emphasis on the social impact of diseases focused on disorders of the liver because malnutrition, poverty, and drug addiction contrib­ ute greatly to their spread. This is compounded by the increase of alcohol abuse, recently on the rise even in the developing countries. Concern with envi­ ronmental pollution has also raised the interest in liver diseases, in part because the liver acts as a guardian against polluting chemicals and in part because it is considered, possibly to an exaggerated degree, a vulnerable target of such chemicals.