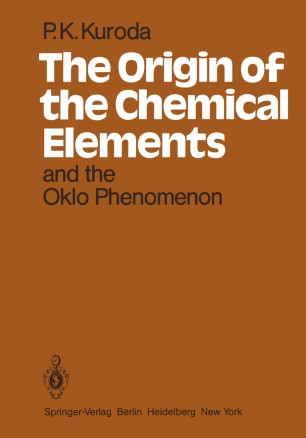 The Origin of the Chemical Elements and the Oklo Phenomenon

At about the time I was a student in the 1930's, it had become increasingly evident that all the elements existing on the Earth today had already been discovered. Scientists then began "discovering" new elements by means of their artificial synthesis and some of the man-made elements found important military as well as industrial applications. I have often wondered, however, if the importance of these artificial elements may not have been overly emphasized by contemporary scientists for their practical applications. It seemed to me that these man-made elements were destined to play an important role du­ ring the second half of the 20th century in the study of the origin of the elements in the Universe. This subject of study, which dates back to the days of ancient Greek philoso­ phers, may be regarded as the most fundamental in the entire compass of our modetn science. Since I joined the faculty of the University of Arkansas in the early 1950's, I have had the good fortune of being able to maintain a long-range research project, the ultimate goal of which was to elucidate the origin of the elements. I have presented the results from these and related investigations on numerous occasions. While serving as a tour speaker of the American Chemical Society for many years, I have had the privilege of visiting many ofthe local sections to present a lecture on the origin ofthe elements.