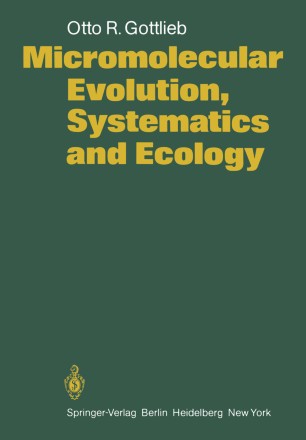 An Essay into a Novel Botanical Discipline

For several decades botanists have been impressed by the discovery that the distribution of secondary plant substances follows the general lines of plant relationships. However, it soon became clear that little was to be gained from the study of individual compounds and their natural distribu­ tion. Therefore, more comprehensive studies were attempt­ ed in which the secondary chemistry of a major plant group was carefully studied and evaluated in the broader context of comparative phytochemistry. Holger Erdtman's admir­ able work on Coniferae is the foremost example of this kind. Since then, there has been an upswing in the study of the biosynthesis of secondary plant substances and it has become quite customary to make use of biosynthetic knowledge in interpreting chemosystematic evidence. More­ over, since taxonomists have insisted that use be made of all potentially available evidence for building classifications, it has been claimed that chemosystematics too should con­ sider the whole array of constituents present in a major taxon. However, in practice it has proved difficult to utilize fully the potential of natural product chemistry and biosynthetic studies for plant systematics and evolution, because bota­ nists found themselves rather disorientated by the scattered, often hardly accessible chemical literature and the fact that the chemical evidence was difficult for them to evaluate! Although the pioneering work of E. C.