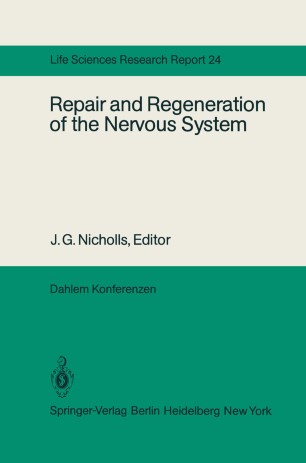 Repair and Regeneration of the Nervous System

Report of the Dahlem Workshop on Repair and Regeneration of the Nervous Sytem Berlin 1981, November 29 – December 4

5) To what extent do events occurring during regeneration re­ semble those seen in development? Questions like these remain open, particularly in relation to the mammalian central nervous system and to the effects of lesions or disease. The first chapters of this volume are concerned primarily with normal and abnormal development of the nervous system. New concepts have emerged over the past few years as a result of experiments made on the development of the higher nervous system in mammals. Thus, the principles of cell death, competition, selective retraction of specific processes, and the effects of abnormalities on the development of the rest of the system have now been extensively investigated. In addition, considerable information is available about biochemical changes during normal and abnormal development in the human. At the other end of the scale, in invertebrates it is now possible to follow cell lineage and to define the origin and fate of a sin­ gle neuron of known function together with its processes. While an understanding of development is clearly important for studying basic mechanisms of repair and regeneration, one cannot expect the processes to be identical or even comparable in the two situations. For example, cell migration, guidance by radial glial fibers, selective cell death, and the critical periods for competition, sprouting, and retraction observed in the visual system can hardly playa part in repair.