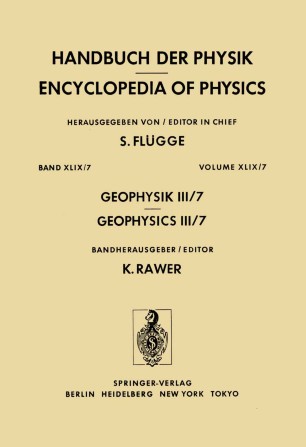 This Encyclopedia aims, basically, at summanzmg the wealth of well­ established facts and outlining the relevant theories in the different branches of physics. With this as goal, the writers were asked to present their specific field in such a way that access is possible to any scientist without special a priori information in that field; the basic concepts of physics are assumed to be known to the reader. The survey given in each paper was also to be long­ lasting, so that even a few years after publication, each volume would be useful, for example as an introduction for newcomers or as a source of information for workers in a neighbouring field. In the field of geophysics, dealt with in Vols. 47--49 of the Encyclopedia, this task is difficult to achieve because during the last decades there has been a much faster development of basic information and theory than during the decades before. When I came to contribute to this work the famous Julius Bartels, then editor of the geophysical part, told me that Vol. 49 should certainly take into account the results of the "International Geophysical Year" 1957/58 (I. G. Y. ), and that we had better wait until these were accessible than produce a kind of information which might be obsolete in a short time.