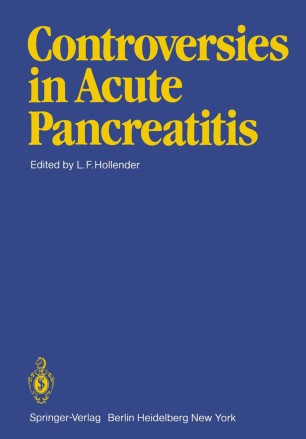 The first complete general study of acute necrotizing hemorrhagic pan­ creatitis was made in 1889 by Reginald Fitz. If we survey the therapeutic evolution of this severe illness, we may briefly summarize it into three pe­ riods: (a) resolutely surgical treatment, from approximately 1880 to 1938; (b) much more conservative treatment, from 1938 to 1963; and (c) a return to surgery, from 1963 onward. Hoffmann, in 1911, was probably the first to advocate the removal of the necrotic portion of the pancreas. In 1933, Okinczyc wrote: "The ope­ rative indications are not a matter for discussion; emergency surgery must be quick to manage the patient's poor resistance." So: "go right to the target, expose, drain ... and hope!" Leriche and Arnaud, more inge­ nious, said: "The aim of the operation is to avoid diffusion of the pan­ creatic juice into the abdominal cavity and limit the harmful effects of what remains in situ ... " With the progress in intensive care techniques, the "conservatives" emphasizing the poor results of surgery had no difficulty in imposing their point of view. Subsequently, in 1963, a new period began with the first successful emergency pancreatoduodenectomy, performed by Watts. If nowadays surgery for the secondary stage of necrosis or abscesses is generally accepted, emergency surgery still remains questionable even if not systematically refused. Many surgeons perform it under three condi­ tions: the worsening of the patient's general state despite medical treat­ ment, a dubious diagnosis, and a biliary etiology.