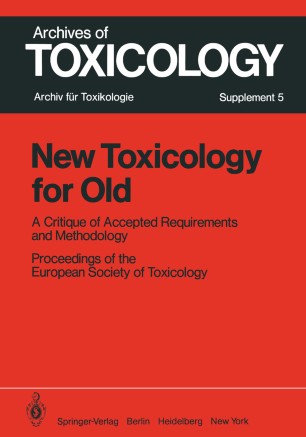 A Critique of Accepted Requirements and Methodology

Part of the Archives of Toxicology book series (TOXICOLOGY, volume 5)

Nervous system is in the most cases a likely target for the untoward effects of chemicals. The harmful consequences affect primarily the individual but may also considerably strain the whole society. The consumption of ethanol is a glaring example (National Institute on Alcohol Abuse and Alcoholism 1978). As ethanol, many organic liquids have similar immediate effects on the nervous system. The rapidity of the response suggests the involvement of the neuronal communication. The nervous system is also vulnerable to the depletion of oxygen, another common cause for the rapid deterioration of the brain function. It is quite impossible to list all the effects produced by the very large number of the individual chemicals. It would be more fruitful to try to understand the characteristics of the nervous system and the biochemical toxic mechanisms in the evaluation of the neurotoxicity of chemicals. Transfer of Xenobiotics in the Brain The adult central nervous system displays a functional barrier toward the blood-borne chemicals so that water-soluble compounds with an approximate molecular weight above 100 are largely prevented from directly entering the brain (Bradbury 1979). The functional barrier has morphological features typical to it and has a very close association of adjacent capillary cells separated by clefts of 12 A wide (Jacobs 1978). The nervous system capillaries are enveloped by glial cell tongues, and these pericytes contain contractile elements (Le Beux and Willemot 1978a, b) so that the capillaries can be constricted.