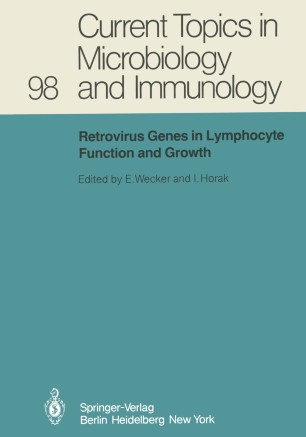 All but one* of the following articles represent comprehensive reports on a workshop held between 7 and 9 May 1981 at the Institute of Virology and Immunobiology, University of Wfuzburg, Federal Republic of Germany. The title of the workshop was "The Involvement of Endogenous Retroviruses inN ormalFunction and Pathological Growth of Lymphocytes." Rather than collecting and printing manuscripts of the individual communications, the organizers asked selected parti­ cipants to write, after the workshop, concise articles each compris­ ing several contributions and discussions on major topics. In so doing, we hope to present to a larger audience a synopsis of the various information and views exchanged at the meeting. Such a procedure seemed the more appropriate as the workshop was intended to bring together specialists from two rather diverse fields: RNA-tumor virology and immunobiology. While this created some initial problems of terminology, it was quite effective in making representatives of one field more aware of the significance and the contributions ofthe other. It also great­ ly contributed to realization of the complexity of the problems involved in virus-induced leukemogenesis.