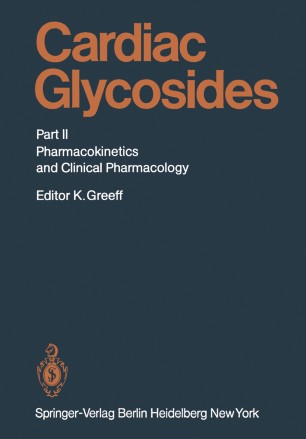 The pharmacokinetics of digitalis glycosides have been the subject of extensive re­ view (IISALO, 1977; ARONSON, 1980; PERRIER et ai., 1977). Research on glycoside kinetics has progressed at a rapid pace, requiring continuing reevaluation of the state of our understanding of this problem. The present article focuses on the effect of disease states (renal, gastrointestinal, thyroid, and cardiac) on the absorption, distribution, and clearance of a number of digitalis glycosides. Evidence is critically reviewed, and interpreted with respect to possible clinical implications. A. Renal Insufficiency I. Strophanthin Strophanthin disposition in renal failure has been evaluated in only two studies. KRAMER et ai. (1970) determined an elimination half-life of 14 h in normals as com­ pared to 60 h in anuric patients. Similar results were reported by BRASS and Pm­ LIPPS (1970) using tritiated strophanthin. They found a half-life value of 18 h in healthy individuals as compared to 68 h in anuric patients. The findings clearly in­ dicate that the elimination half-life of strophanthin is prolonged in renal failure.