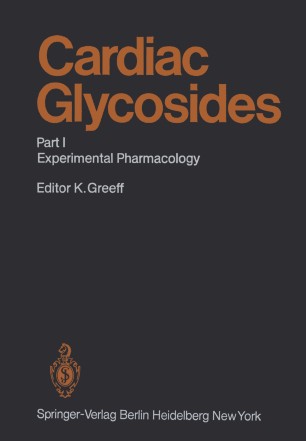 Following the monographs by STRAUB (1924) and LENDLE (1935), this is the third contribution to the "Pharmacology of Cardiac Glycosides" within the Handbook of Experimental Pharmacology, which was founded by ARTHUR HEFFTER and con­ tinued by WOLFGANG HEUBNER. Because of the need created by the length of time that had elapsed since LENDLE'S work, the editorial board requested the rapid ap­ pearance of this 56th volume, which represents current knowledge of the pharma­ cology and clinical pharmacology of cardiac glycosides. In order to avoid any delay, numerous authors were invited to contribute because shorter contributions take less time to prepare and are consequently more up-to-date. The disadvantage is that some overlap between certain chapters could not be avoided, despite the editor's efforts. Overlapping can, however, actually be useful, in that differing opinions may be provided and topical issues discussed from varying viewpoints. This re­ minds the reader that scientific horizons in medicine should often be widened or revised. I would like to thank DR. ALANNA Fox and DR. K. ANANTHARAMAN for their help and advice in the revision of certain chapters. I am also grateful to Springer­ Verlag, and particularly to MR. WINSTANLEY and MR. EMERSON, for their contribu­ tion to the completion of this volume through translation and corrections. In con­ clusion I would like to thank MRS. WALKER, MR. BISCHOFF, MRS. SEEKER, and MR. BERGSTEDT of Springer-Verlag for their helpful support.