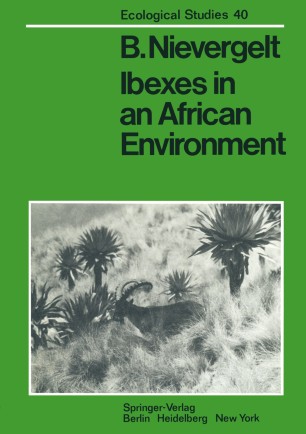 Ibexes in an African Environment

Ecology and Social System of the Walia Ibex in the Simen Mountains, Ethiopia

The Caprinae are characteristic ungulates of palaearctic mountain regions. The Walia ibex, Capra ibex walie, a member of the Caprinae, has colonized successfully the Simen mountains in Ethiopia, and as such presents an interesting act in the history of the Caprinae. Apart from the question of how the Walia ibex or its ancestors ever reached the Simen mountains, the only place it occurs, I would like to stress a further point: about half of the existing ungulate species in the world are endemic to Africa. Eightyseven species of the Artiodactyla are reported to live in this continent, while there are only 17 in South America (Haltenorth 1963, Delany and Happold 1979). Such abundance of ungulate forms must have been attended by optimal utilization of the various habitats and form co-adaptation of sympatric species (Lamprey 1963, Bell 1970, Gentry 1970). Despite such intense com­ petition however, the Walia ibex found its natural niche still open. Obviously, its adaptations to living on steep cliffs have favoured its establishment over the already existing ungulate fauna in an afroalpine mountain area. In fact, none of the Cervids has achieved a similar successful colonisation on the African continent, even though they are much older as a group, and have already shown themselves to be well established on the American and Eurasian continents.