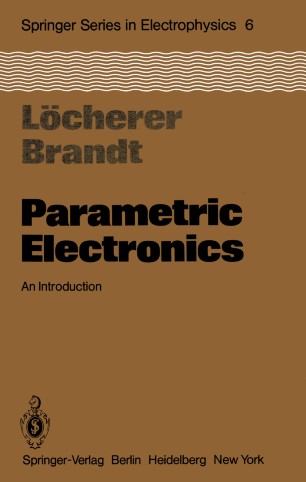 In this chapter, first the parametric principle is illustrated by two simple examples, one mechanical and one electrical. Then the realization of time­ varying reactances is explained, followed by a short history of "parametric electronics". This survey demonstrates the importance of parametric circuits in the field of low-noise microwave electronics as well as explains the organization of this book. 1.1 The Parametric Principle An oscillating system comprising a single or several time-varying energy­ storing elements is called a parametric system; usually the variations are harmonic functions of time. Everybody knows one example of a mechanical parametric system from his childhood, namely, a swing. Therefore, we will start with this example though as it turns out, a swing is a rather compli­ cated parametric system. Fortunately, the electrical parametric systems, which form the object of this book, are simpler. Figure 1.1 shows such a swing. If it is removed from its equilibrium position and the child stands on it in a fixed attitude, the swing oscillates with a certain amplitude, the magnitude of which decreases with time due to the mechanical friction of the system. To increase the amplitude of oscil­ lation, the child changes positions during swinging: it crouches and straightens in a certain way twice during one cycle of the swing.