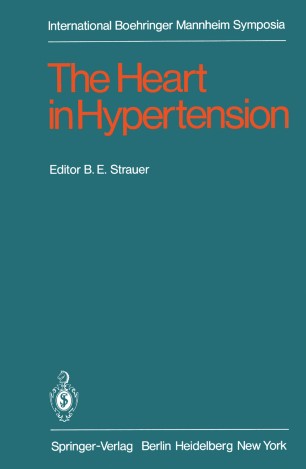 The Heart in Hypertension

Hypertensive heart disease is one of the most frequent diseases in man. It is esti­ mated that there are six to eight million hypertensive patients in the Federal Re­ public of Germany today. This corresponds with an incidence of 10%-15% in the whole population. Approximately between three and four million show organic eardiac manifestations of hypertension. Of all deaths occurring before the age of 65,30%-40% are attributable to hypertension, and the total morta­ lity from hypertension is about 20%-25%. Recent epidemiological and clini­ cal studies have revealed similar figures for other countries, such as the United States and Japan. Hypertensive hypertrophy and cardiac failure are found to be many times more frequent than eardiae hypertrophy and failure of any other origin. Despite the apparent clinical and social importance of the biologieal system "blood pressu­ re and the heart", data on eardiac performance, on systemic and coronary haemodynamics and on the morphological, bioehemical and contractile proper­ ti es of ventrieular heart muscle in both experimental and clinical hypertension are rare. This is the reason and stimulus for having organized this symposium, which is the first one coneeming this topie.